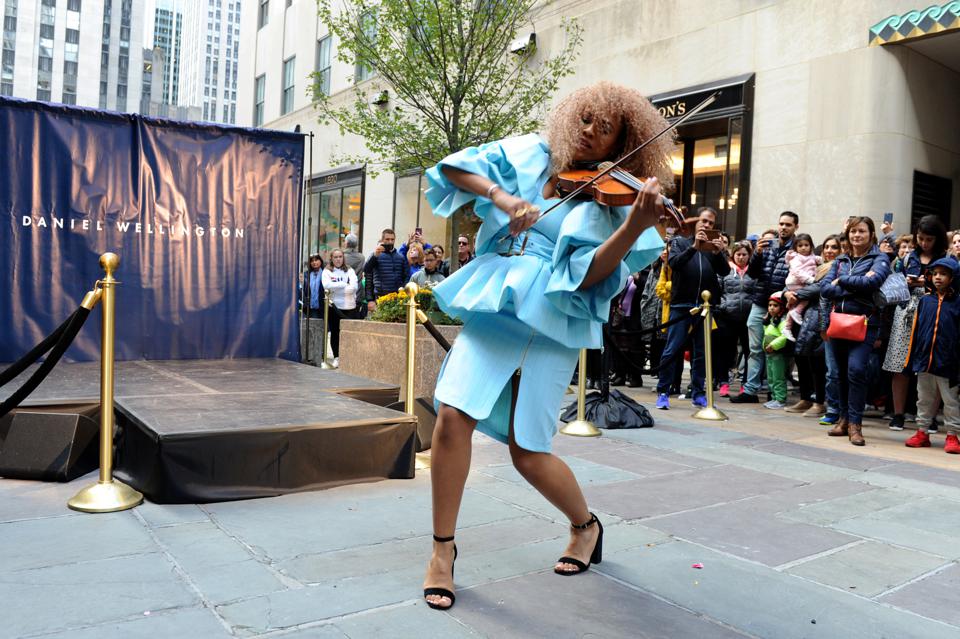 Read the article on Forbes

Brooklyn-based violinist Ezinma (Meredith Ezinma Ramsay, also known as "Classical Bae"), who has performed onstage with Beyoncé, released her first single today. The new track, "Beethoven Pleads the Fifth" by Decca Records (Universal), is a fusion of what she says are often considered to be two very opposite worlds-classical music and hip-hop beats.

A classically-trained violinist, Ezinma began performing covers of viral hits like "Mask Off" by Future and "Gucci Gang" by Lil Pump on her violin during recent years and since has achieved viral fame. Now, through her new music, the star is embracing her mixed cultural and ethnic background and inspiring greater visibility and access for children of color in the classical music space.

"It's very exciting," says Ezinma, who has been working for the past three years on music for release. "Finding the perfect balance between classic and hip-hop has been my obsession. I feel like I've finally found this equal balance between both worlds…I've taken classical music and reimagined it for today's modern era."

Stylistically, Ezinma explains, it is rare for a classical violinist to delve into a new genre of music, as it is easy to diminish the authenticity of classical music. The artist began working on her debut song last fall, and through extensive experimentation, she achieved her goal of creating a composition that respects both classical and hip-hop spaces. The pandemic's pause on travel has given her more time to work on three additional new singles and an album due out next year.

Classical music was a safe space for Ezinma, who says that she felt out of place growing up as a mixed-race girl in the predominately white city of Lincoln, Nebraska. Her German-American mother and Guyanese father introduced her to a wide range of music genres, including everything from Parliament and Bill Monroe, to Bob Marley and Billie Holiday. She first picked up the violin at age 3 and soon began learning the Suzuki Method music curriculum that set her on the path to stardom.

In 2016 Ezinma accepted an invitation from Beyoncé to join her all female band. She also appeared in her Formation World Tour, release of Lemonade and performance at Coachella. She credits her mixed cultural and ethnic background as forming the unique perspective she brings to her work, which also includes collaborations with artists Stevie Wonder, Yo-Yo Ma, Kendrick Lamar, Joshua Bell, Clean Bandit, Sza, Mac Miller and A$AP Ferg.

Ezinma describes her new single as a "massive and cinematic" piece of "ear candy" that is full of different sound textures made for daydreaming. She also defines it as a healing symbol of unity to make children of color feel a sense of belonging in the classical music space.

"Given the current racial climate, it's a beautiful time to share this fusion of two worlds that were originally racially divided," Ezinma says. "I want kids to hear this song and know that you can always make space for yourself, even if the world tells you that you don't belong."

The New York Times NYT +0.4% reported last month that Black musicians make up less than 2% of orchestras in the U.S. The Times also this year examined a "Racial/Ethnic and Gender Diversity in the Orchestra Field" report by the League of American Orchestras that found American orchestras are among the least racially diverse institutions in the nation. The data shows that the number of African American orchestra players in the U.S. barely grew from 2002 (1.7%) to 2014 (1.8%).

Graham Parker, president of Decca Records, U.S., agrees that historically classical music has not been a very diverse community.

"There have been many people doing great work to change the color of classical music, but there is a long way to go," Parker says. "Ezinma is making important and crucial strides just by being a powerful, distinctive, creative force…she is someone that children can look up to and say, 'That could be me, too.'"